This gland is attached to the central part of the brain and secrets the pituitary hormones also called growth hormones. It controls the functioning of other endocrine glands. It also regulates the growth and development of body. If excess of hormones is stored then it cause gigantism and if insufficient of hormones is secreted, it cause dwarfism. 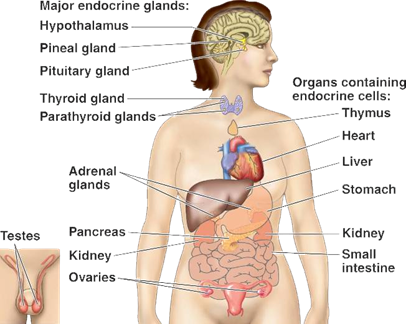 It is a small gland attached to the dorsal part of the brain. It controls the time mechanism of the organism, which regulates the sleeping of man.

This gland is found in small babies which produce WBC to protect babies from diseases and disappears with the age.

This gland is found behind larynx and secrets thyroxine hormones which contains iodine. It controls the metabolism of carbohydrates, fats and proteins. Excessive secretion of this hormones cause hyperthyroidism and insufficient secretion cause goiter.

This gland is inside the thyroid gland and secrets parathormone which increase the level of calcium in blood.

It is located on kidney and secrets the hormones called adrenaline. When a person is fighting or running or get frightened this hormones is secreted in large amount.

It secrets male sex hormones called testrone which begins at the onset of puberty. It helps in development of sperm, beard, moustache, hard voice etc.

It secrets female sex hormones called oestrogen and progesterone. It produces egg cells in female. It leads to fertilization in female and production of baby in female.

Which tropism is responsible for the movement of plants in response to the chemicals?

Which plant hormones is responsible for elongation in plants?

The functional unit of nerve cells is called: