In the previous chapter we have studied about the various activities involved in the maintenance of life process. In this chapter, we will discuss "how our body controls these various activities"?. How do we coordinate and response to the external stimulus? There must be a system which provides the control and coordination activities in the multicellular organisms.

The ability of the organism to detect changes and make appropriate response is called sensitivity. Anything to which an organism responds and reacts is called a stimulus. Animals response to the stimulus either by moving towards it, or by moving away from it. Response and coordination in animals involve the sense organs, nervous system and hormones.

The enteric nervous system, a subsystem of the peripheral nervous system, has the capacity, even when severed from the rest of the nervous system through its primary connection by the vagus nerve, to function independently in controlling the gastrointestinal system. 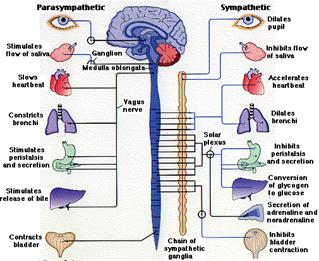 Neurons send signals to other cells as electrochemical waves travelling along thin fibers called axons. This causes chemicals called neurotransmitters to be released at junctions, called synapses. A cell that receives a synaptic signal may be excited, inhibited, or otherwise modulated.

Sensory neurons are activated by physical stimuli impinging on them, and sends signals that inform the central nervous system of the state of the body and the external environment. Motor neurons, situated either in the central nervous system or in peripheral ganglia, connect the nervous system to muscles or other effector organs. Central neurons, which in vertebrates greatly outnumber the other types, make all of their input and output connections with other neurons. The interactions of all these types of neurons form neural circuits that generate an organism's perception of the world and determine its behavior. Along with neurons, the nervous system contains other specialized cells, called glial cells, which provide structural and metabolic support. 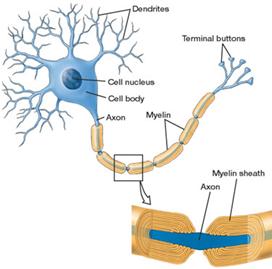 At the most basic level, the function of the nervous system is to send signals from one cell to others, or from one part of the body to others parts. There are multiple ways that a cell can send signals to other cells.

At a more integrative level, the primary function of the nervous system is to control the body. It does this by extracting information from the environment using sensory receptors:

The evolution of a complex nervous system has made it possible for various animal species to have advanced perception abilities such as vision, complex social interactions, rapid coordination of organ systems, and integrated processing of concurrent signals. In humans, the sophistication of the nervous system makes it possible to have language, abstract representation of concepts, transmission of culture, and many other features of human society that would not exist without the human brain.