It is one of the important-organ of human beings. It works on the’ refraction of light as the other optical instruments, like camera, telescope, microscope etc. In this part we discuss about the structure and various defects of human eyes. The main parts of human eyes are Cornea, iris, pupil, ciliary muscles, lens, retina, aqueous humour, vitreous humour, and optic nerves.

Cornea is the outermost layer of the human eyes which is made up of a transparent substance and bulging outwards. The light enters into our eyes through cornea.

In front of the eye, the choroid coat forms the iris. This may be pigmented and is responsible for the different color of the eye. An opening, the pupil, is present in the center of the iris. The size of this opening is variable and under automatic control. In dim light the pupil enlarges, letting more light into the eye. In bright light, the pupil closes down. This not only protects the interior of the eye from excessive illumination, but improves its image-forming ability and depth of field.

The inner coat of the eye is the retina. It contains the visual sensing apparatus such as, the actual light receptors, the rod cells and cone cells. The exterior of the cornea is bathed by tears, while the interior is bathed by the aqueous humor. It is an isosmotic fluid containing salts, albumin, globulin, glucose,and other constituents. The aqueous humor brings nutrients to the cornea and to the lens and removes end products of metabolism from these tissues. The vitreous humor is a collagenous or gelatinous like mass that not only helps to maintain the shape of the eye, but also allows it to retain some pliability. The lens of the eye is located just behind the iris. It is held in position by ligaments. Ordinarily, these are kept under tension and the lens is correspondingly flattened. However, contraction of muscles attached to these ligaments relaxes them and permits the lens to take on a more nearly spherical shape. These changes in lens shape enable the eye to shift its focus from far objects to near objects and vice versa. The lens of the eye is bathed, on one side by the aqueous humor, and supported on the other side by the vitreous humor. The lens has no blood

supply, but it is an active metabolizing tissue. The lens is mostly water and protein. The proteins are synthesized within the lens, occurring mostly in an epithelial layer around the edge of the lens. The center area of the lens, the core, consists of the lens cells that are present at birth. The lens grows from the periphery. The human lens increases in weight and thickness with age and becomes less elastic. On an average the lens may increase threefold in size and approximately 1.5-fold in thickness from birth to about the age of 80. 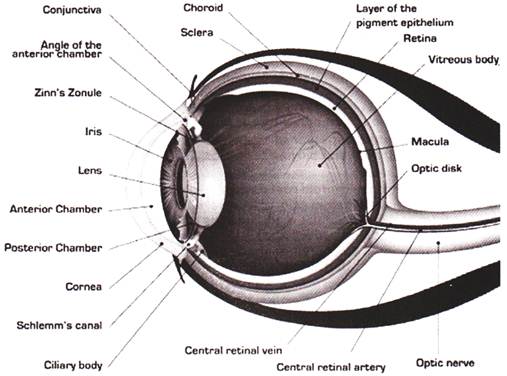 The iris and the lens divide the interior of the eyeball into two main chambers. The anterior one is filled with a watery fluid, the aqueous humor. The porteriorchamber is filled with a jellylike material of marvelous clarity, the vitreous humor. Eyes are in continuous movement during watching. Even when they are observing, a resting object they are doing small, involuntary movements. Movement of the eyeball is accomplished by three pairs of muscles, the members of each pair working antagonistically. The coordinated action of these muscles enables the eyeball to be rotated in any direction. Thus, we are able to train both eyes in a single direction. This produces two slightly differing views of the same scene, which our brain is able to fuse into a single, three-dimensional image.

When the ray of light coming from the object enters into our eyes from pupil and falls on the eye lens, it converges and produce the real and inverted image on the retina. The image formed on the retina is transmitted to the brain by the optic nerve and produces the sensation of vision. The retina consists of two types of the cells rod cell and cone cell. The rod cell produce the sensation of vision and responds to the intensity of light; and cone cell helps in differentiating the colors. The region on the retina, which is insensitive to the light is called the blind spot.

Our eyes can focus distant object, as well as, nearby object on its retina, by changing it focal length. This ability of the eyes is called the power of accommodation of the eyes. The least distance of distinct vision of the normal human eyes is 25 cm. The farthest point from the eye, at which an object can be seen clearly, is known as the far point of the eye and the nearest point up to which eyes can see the object clearly, is called the near point of the eye.

Defects of Vision and their Corrections

Sometime it happens that we cannot see the object clearly due to one reason or the other and such problems are called the defects of vision. There may be different reasons for different defect of vision.

The different defects of vision are:

Nearsightedness, also called myopia is common name for impaired vision. In this a person sees near objects clearly, while distant objects appear blurred. In such a defective eye, the image of a distant object is formed in front of the retina and not at the retina itself. Consequently, a nearsighted person cannot focus clearly on an object farther away than the far point for the defective eye.

This defect arises because the power of the eye is too large due to the decrease in focal length of the crystalline lens. This may arise due to either

(a) Excessive curvature of the cornea, or

(b) Elongation of the eyeball.

This defect can be corrected by using a concave lens. A concave lens of appropriate power or focal length is able to bring the image of the object back on the retina itself.

Farsightedness, also called hypermetropia, is the common name for a defect in vision, in which, a person sees near objects with blurred vision, while distant objects appear in sharp focus. In this case, the image is formed behind the retina.

This defect arises because either

(a) The focal length of the eyelens is too great, or

(b) The eyeball becomes too short, so that light rays from the nearby object, say at point N, cannot be brought to focus on the retina to give a distinct image.

This defect can be corrected by using a convex lens of appropriate focal length. When the object is at N', the eye exerts its maximum power of accommodation Eyeglasses with converging lenses supply the additional focussing power required for forming the image on the retina.

Presbyopia, progressive form of farsightedness that affects most people by their early 60s. The power of accommodation of the eye decreases with ageing Most people find that the near point gradually decreases.

Astigmatism, a defect in the outer curvature on the surface of the eye that causes distorted vision. In astigmatism, a person cannot simultaneously focus on both horizontal and vertical lines.

This defect is usually due to the cornea that is not perfectly spherical. Consequently, it has different curvatures in different directions in vertical and horizontal planes. This results in objects in one direction being well-focussed, while those in a perpendicular direction not well focussed.

This defect can be corrected by using eyeglasses with cylindrical lenses oriented to compensate for the irregularities in the cornea.

One of the most beautiful example of dispersion light is the formation rainbow soon after rainfall in the sky. It is also called the natural spectrum. Soon after rainfall when sun comes out, the sunlight falls on the tiny droplets of water hanging in the atmosphere and undergoes dispersion into its constituents colors and appears as a band of seven colors in the sky, in the form of rainbow. The raindrops acts as a prism in the atmosphere.

During sunrise when the sun is slightly below the horizon, the sunlight which is comming from less dense air to more dense air, is refracted downwards as it passes through the atmosphere. Hence sun appears to be raised above the horizon when actually it is slightly below the horizon. Similarly during the sunset, also due to atmospheric refraction, we can see the sun for about 2 minutes more even after the sun set below the horizon. In other words, sun raise takes places 2 minutes before the actual sunrise and sunset also takes place two minutes after the actual sunset.

The Sunlight is made up of seven colors and when this mixture of seven colors passes through the atmosphere most of the longer wavelength lights do not get scattered much by air particles and passes straight through the atmosphere. However, the shorter wavelength blue color light gets scattered all around the sky by air molecules in the atmosphere and our eyes receives only these blue colors and hence sky appears blue to us. If there would have been no atmosphere, the sky would have appeared black or dark to us, as it appears in the outer space.

We use red color light for the danger signal because it has longer wavelength and are least scattered by the particles in the atmosphere and hence can be seen from the longer distance.

Sun Appears Reddish at the Time of Sunrise and Sunset

At the time of Sunrise and Sunset, the Sun is near the horizon and the Sunlight has to travel the long distance through the atmosphere, before reaching our eyes. During this journey most of the shorter wavelength of the sunlight get scattered away in the atmosphere and only the longer wavelength of light i.e. red light reaches our eyes, hence the Sun appears reddish at the time of sunrise and sunset.

The part of retina which is insensitive to the light is called:

The least distance of distinct vision is:

Which lens can be used to correct the defect of myopia?

Which one of the following disease is due to the old age of the individual?