Silver metal is considered to be one of the best reflector of light.

Reflection of light shows the particle nature of light. For example, when a rubber cricket ball is strike against a wall it bounces back in the opposite direction, or in other words it is reflected back by the wall. Similarly, if we try to see objects in a dark room it is not visible to us, but if we switch on the light it becomes visible to us. This is because when we switch on the light, the light falls on the object and is reflected back and absorbed by our eyes, and hence we are able to visualize the objects. 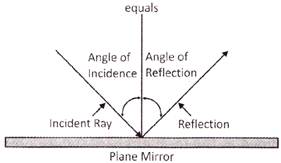 Thus on the basis of above observation the laws of reflection has been formulated as below:

There are Two Laws of Reflection. These are

As we know that the silver metal is the best reflector, we can make an ordinary mirror simply by coating a layer of silver metal on the surface of glass. A plane mirror is a good reflector of light. The reflecting surface is divided into two category as plane and spherical surfaces.

The Spherical Mirror is Again of Two Types

The mirror which is curved inwards is called a concave mirror. It is also known as converging mirror. It converges the ray of light falling on its surface at a point on the surface.. 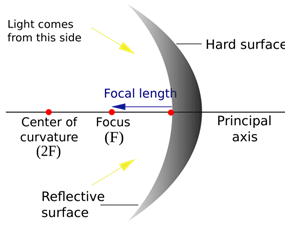 The mirror which is curved outward is called a convex mirror. It is also known as diverging mirror. 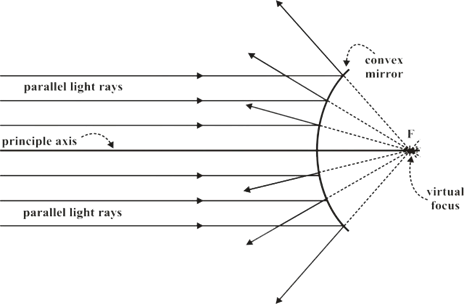 The centre of curvature, pole, focus, all lies on the principal axis. The focus is defined as the point on the principal axis at which ray of light converges after reflection. It lies at the midpoint between the centre of curvature and pole of the mirror. It is denoted by f. The distance between the pole and focus is called the focal length. It is expressed by \[f=\frac{R}{2}\].

The portion of a mirror from which the reflection of light actually takes places is called the aperture of the mirror. It is also the diameter of the spherical surface or also the size of the spherical mirror.