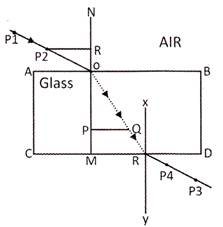 Various Effect of Refraction of Light

The apparent depth of the water in the swimming pool appears less than actually it is, because of refraction of light when it passes from air into the water. When we look into the pool from above, the ray of light converges above the base of the pool; and hence it appears to be less deep, than actually it is.

A Coin Placed under Water appears to be raised

A coin appears to be raised from the base, when placed in a glass of water. It is due to the refraction of light that takes place when it goes from water into air. When the coin is place under water, due to refraction of light a virtual image is formed near the surface of the water. Since the virtual image of coins which we see is near the surface of water, the coin appears to be raised.

When the light travels from one medium to another, it undergoes refraction according to the following law: