Geothermal energy is thermal energy generated and stored in the Earth. Thermal energy is energy that determines the temperature of matter. Earth's geothermal energy originates from the original formation of the planet, from radioactive decay of minerals, from volcanic activity, and from solar energy absorbed at the surface. The geothermal gradient, which is the difference in temperature between the core of the planet and its surface, drives a continuous conduction of thermal energy in the form of heats from the core to the surface. Geothermal power is cost-effective, reliable, sustainable, and environmentally friendly, but has historically been limited to areas near tectonic plate boundaries. Recent technological advances have dramatically expanded the range and size of viable resources, especially for applications such as home heating, opening a potential for widespread exploitation. Geothermal wells release greenhouse gases trapped deep within the earth, but these emissions are much lower per energy unit than those of fossil fuels. As a result, geothermal power has the potential to help mitigate global warming, if widely deployed in place of fossil fuels. Geothermal electric plants were traditionally built exclusively on the edges of tectonic plates where high temperature geothermal resources are available near the surface. The thermal efficiency of geothermal electric plants is low, around 10-23%, because geothermal fluids do not reach the high temperatures of steam from boilers. 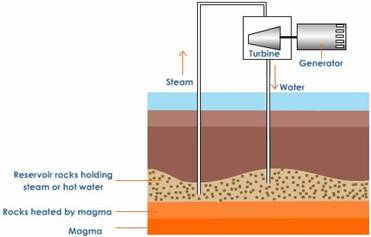 The laws of thermodynamics limit the efficiency of heat engines in extracting useful energy. Exhaust heat is wasted, unless it can be used directly and locally, for example in. greenhouses, timber mills, and district heating. Geothermal power requires no fuel except for pumps, and is therefore immune to fuel cost fluctuations, but capital costs are significant. Drilling accounts for over half the costs, and exploration of deep resources entails significant risks. A typical extraction and injection wells in Nevada can support 4.5 megawatts (MW) and costs about $10 million to drill, with a 20% failure rate. Geothermal power is considered to be sustainable because any projected heat extraction is small compared to the Earth's heat content.

The Earth has an internal heat content of 1031 joules (3-1015 TW-hr). About 20% of this is residual heat from planetary accretion, and the remainder is attributed to higher radioactive decay rates that existed in the past.