Golgi complex is made up of various membranous system e.g., cisternae, vesicles and vacuoles. These are also called golgi bodies, golgisomes, lipochondrion, dictyosomes, Dalton complex, idiosomes or Baker’s body and “traffic police” of the cell.

Discovery : First observed by George (1867) but it’s morphological details were given by Camillo Golgi (1898), in nerve cells of barn owl and cat.

Occurence : It is present in all eukaryotic cells. In plants, these are scattered irregularly in the cytoplasm and called as “dictyosomes”. These are absent in bacteria and blue green algae, RBCs, spermatozoa of bryophytes and pteridophytes, and sieve tube cells of phloem of angiosperm. The number of golgi body increased during cell division. Average number 10 – 20 per cell. Golgi body surrounded by a zone of protoplasm which is devoid of cell organelles called zone of exclusion (Morre, 1977).

Structure : Under transmission electron microscope the st. of golgibodies was study by Dalton and Felix (1954), golgi body is made of 4 parts.

(1) Cisternae : Golgi apparatus is made up of stack of flat. Sac like structure called cisternae. The margins of each cisterna are gently curved so that the entire golgi body takes on a cup like appearance. The golgi body has a definite polarity. The cisternae at the convex end of the dictyosome comprises forming face (F. face) or cis face. While the cisternae at the concave end comprises the maturing face (M. face) or trans face. The forming face is located next to either the nucleus or endoplasmic reticulum. The maturing face is usually directed towards the plasma membranes. It is the functional unit of golgi body.

(2) Tubules : These arise due to fenestration of cisternae and it forms a complex of network.

(3) Secretory vesicles : These are small sized components each about 40 Å in diameter presents along convex surface of edges of cisternae. These are smooth and coated type of vesicles.

(4) Golgian vacuoles : They are expanded part of the cisternae which have become modified to form vacuoles. The vacuoles develop from the concave or maturing face. Golgian vacuoles contain amorphous or granular substance. Some of the golgian vacuoles function as lysosomes. 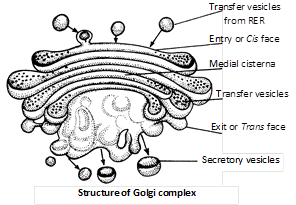 Origin : Most accepted view is that golgi body originates from RER-that has lost its ribosomes from this RER arise transport vesicles that contain Golgi membrane and fuse with the saccule on the forming face of Golgi apparatus. This is why this face is called the forming face.

(1) The main function of golgi body is secretion, so it is large sized among the secretory cells.

(2) Glycosidation of lipids i.e., addition of oligosaccharides to produce glycolipids.

(3) Glycosylation of proteins i.e., addition of carbohydrate to produce glycoproteins.

(6) In oocytes of animal, golgi apparatus functions as the centre around which yolk is deposited i.e., vitellogenesis.

(7) Membrane of the vesicles produced by golgi apparatus join in the region of cytokinesis to produce new plasmalemma.

(8) It is also called export house of cell.

(10) The golgi complex gives rise to the acrosome in an animal sperm.