Mitochondria (Gk. Mito = thread ; chondrion = granule) are semi autonomous having hollow sac like structures present in all eukaryotes except mature RBCs of mammals and sieve tubes of phloem. Mesosomes of prokaryotes (bacteria) is analogous to mitochondrion in eukaryotes.

(1) These were first observed in striated muscles (Voluntary) of insects as granules by Kolliker (1880), he called them “sarcosomes”.

(6) Michaelis (1898) demonstrated that mitochondria play a significant role in respiration.

(8) Seekevitz called them “Power house of the cell”.

(2) Mitochondria of a cell are collectively called chondriome.

The matrix facing face is called ‘M’ face and face towards perimitochondrial space is called ‘C’ face. The ‘M’ face have some small stalked particles called oxysomes or \[{{F}_{1}}\] particle or elementory particle or Fernandez – Moran Particles (\[{{10}^{4}}{{10}^{5}}\] per mitochondria). Each particle is made up of base, stalk and head and is about 10nm in length. 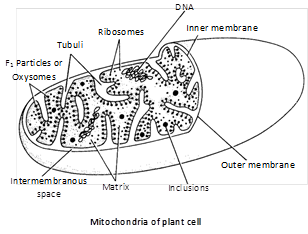 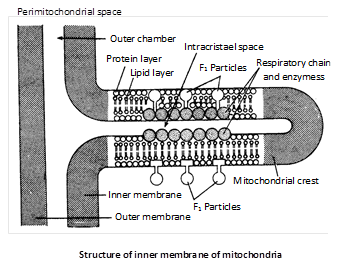 The mitochondria can form some of the required proteins but for most of proteins, these are dependent upon nuclear DNA and cytoplasmic ribosomes, so the mitochondria are called semi-autonomous organelles.

According to endosymbiotic origin of mitochondria by Kirns Altman, mitochondria were intially a free living, aerobic bacteria which during to the process of evolution entered an anaerobic cell and become established as mitochondria. This theory is supported by many similarities which exist between bacteria and mitochondria.

(2) Intermediate products of cell respiration are used in the formation of steroids, cytochromes, chlorophyll, etc.

(3) These are also seat of some amino acid biosynthesis.

(4) Mitochondria also regulate the calcium ion concentration inside the cell.