Every living cell is externally covered by a thin transparent electron microscopic, elastic regenerative and selective permeable membrane called plasma membrane. It is quasifluid in nature. Membranes also occur inside the cells. They are collectively called biomembranes. The term cell membrane was given by C. Nageli and C. Cramer (1855) for outer membrane covering of the portoplast. It was replaced by the term plasmalemma by Plower (1931).

Chemical composition : Proteins lipoprotein (Lipid +Protein) are the major component forming 60% of the plasma membrane. Proteins provide mechanical strength and responsible for transportation of different substances. Proteins also act as enzyme. Lipids account may 28%-79% depending upon the type of cell and organism involved (in humans, myelin 79%). The lipids of plasma membrane are of three types namely phospholipids, glycolipids and sterols. The sterol found in the membrane may be cholesterol (Animals), phytosterol (Plants) or ergosterol (Microorganisms).

Ultrastructure : Under electron microscope the plasma membrane appears three layered, i.e., trilaminar or tripartite. One optically light layer is of lipid and on both sides two optically dense protein layers are present.

Molecular structure and different models : Several models have been proposed to explain the structure and function of the plasma membrane.

(1) Overton’s model : It suggests that the plasma membrane is composed of a thin lipid single layer.

(2) Sandwitch model : It was proposed by Davson and Danielli (1935). According to this model the light biomolecular lipid layer is sandwitched between two dense protein layers (globular a type protein). This model was also said to be unit membrane hypothesis.

(3) Robertson’s unit membrane model : It states that all cytoplasmic membranes have a similar structure of three layers with and electron transparent phospholipid bilayer being sandwitched between two electron dense layer of proteins (extended or \[\beta \]  type protein).

(4) Fluid mosaic model : The most important and widely accepted latest model for plasma membrane was given by Singer and Nicolson in 1972. According to them it is “protein iceberg in a sea of lipids.”

According to this model, the cell membrane consists of a highly viscous fluid matrix of two layers of phospholipid molecules. Protein molecules occur as separate particles asymmetrical arranged in a mosaic pattern.

Some of these are loosely bound at the polar surfaces of lipid layers, called peripheral or extrinsic proteins. Others penetrate deeply into the lipid layer called integral or intrinsic proteins. Some of the integral proteins penetrate through the phospholipid layers and project on both the surface. These are called trans membrane or tunnel proteins (glycophorins). Singly or in groups, they function as channels for passage of water ions and other solutes. 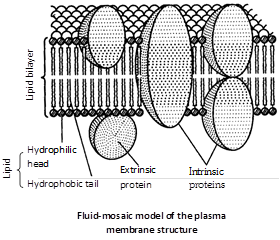 The carbohydrates occur only at the outer surface of the membrane. Their molecules are covalently linked to the polar heads of some lipid molecules (forming glycolipids) and most of the proteins exposed at outer surface (forming glycoproteins). Through glycoproteins, bacteria recognise each other. e.g., female bacteria are recognised by male bacteria.

(2) Lomasomes : They are plasmalemma foldings found in fungal cells. These were reported by Moore and Maclean.

(3) Mesosomes : It serves as site for cellular respiration in prokaryotes.

(4) Tight junctions or (Zonulae occludents) : Plasma membrane of two adjacent cells are fused at a series of points with a network of ridges or sealing strands. e.g., capillaries, brain cells collecting tubules etc.

(6) Transosomes : It is found in follicular cells of ovary of birds and have triple unit membrane. First reported by Press (1964).

(1) It is not only provides mechenical strength but also acts as a protective layer.

(2) Plasma membrane is responsible for the transportation of materials, molecules, ions etc.

(3) It helps in osmoregulation.

(4) Diffusion of gases (O2 and CO2) take place through plasma membrane by simple and facilitated diffusion.

(5) Water as well as some solute molecules and ion pass through membranes pores; pores are always bordered by channel proteins.