The nucleus also called director of the cell. It is the most important part of the cell which directs and controls all the cellular function.

Discovery : The nucleus was first observed by Robert Brown (1831), in orchid root cells. Nucleus plays determinative (in heredity) role in cell and organism, that was experimentally demonstrated by Hammerling (1934) in surgical experiments with green marine unicelled algae Acetabularia.

Occurence : A true nucleus with definite nuclear membrane and linear chromosome, is present in all the eukaryotes except mature mammalian RBCs, sieve tube cell of phloem, tracheids and vessels of xylem. The prokaryotes have an incipient nucleus, called nucleoid or prokaryon or genophore or false nucleus.

(3) Polynucleate : e.g., fungal hyphae of Rhizopus, Vaucheria. Polynucleate condition may be because of fusion of a number of cells. i.e., syncytium, coconut endosperm or by free nuclear divisions without cytokinesis i.e., coenocyte.

Enzymes like polymerases are abundantly present and help in synthesis of DNA and RNA.

Ultrastructure : The nucleus is composed of following structure.

(1) Nuclear membrane : It is also called nuclear envelope or nucleolemma or karyotheca, was first discovered by Erclab (1845).

Structure : It is a bilayered envelope. Each membrane is about 60-90Å thick lipoproteinous and trilaminar. Outer membrane, called ectokaryotheca (with ribosome) and inner membrane is called endokaryotheca (without ribosome). Two membranes are separated by a fluid-filled intermembranous perinuclear space (about \[100-300{AA}\]). 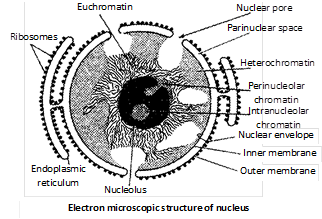 Origin : It is formed by the fusion of ER elements during the telophase of cell division.

(i) It regulates the nucleo-cytoplasmic interactions.

(iii) It maintains the shape of the nucleus.

(2) The nucleolus (Little nucleus plasmosome) : It was first observed by Fontana (1781) in the skin cells of an eel. Bowman (1840) coined term 'nucleolus'. Wagner (1840) gave its light microscopic structure.

Position : It is generally associated with nucleolar organizer region (NOR) of the nucleolar chromosomes. It is absent in muscle fibres, RBC, yeast, sperm and prokaryotes.

Number : Generally, a diploid cell is with two nucleoli but there are five nucleoli in somatic cell of man and about 1000 nucleoli in the oocytes of Xenopus.

(1) Chromatin : The nucleolus is surrounded by perinucleolar chromatin.

(3) Pars granulosa : Granules of \[150200\text{ }{AA}\] diameter constitute the granular part of the nucleolus. Ribosome formation takes place in this part so it is called assembly line of ribosome.

(4) Pars amorpha : The granules and the fibrils lie dispered in an amorphous proteinaceous matrix. Nucleolus is stained by “pyronine”. It is not bounded by any limiting membrane. 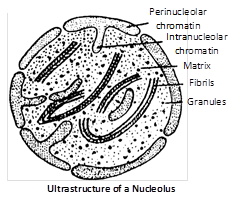 Chemical composition : Nucleolus is mainly formed of RNA and non histone acidic proteins. It is a store house of rRNA.

Origin : A nucleolus is formed at specific sites, called the nucleolar organizers, present on certain chromosomes region (NOR).

(i) It is seat of biogenesis of rRNA and also stores rRNA.

(5) Nuclear matrix : It is network of proteinaceous fibrils. It is outer thicker part is called fibrous lamina (Haris and James, 1952).