Nerve cells (= neurons) : Irritability is a basic characteristic of the “living substance”, i.e., the protoplasm. Consequently, every living cell becomes excited when stimulated. However, the nerve cells and muscle fibres are specialized excitable cells of body, capable of transmitting or conducting excitations along their membranes. Of these, muscle cells are further specialized for contraction while nerve cells are further specialized for receiving stimuli (as sensory or receptor cells) and transferring excitations from one to the other.

A typical neuron consists of a nucleated cell body (= cyton, soma or perikaryon), five to seven short, slender and branched (= arborized) dendrites, and a single, relatively thicker and longer fibrous axon. The latter is terminally branched into short telodendria. Each telodendron bears a terminal knob or botton. Bottons of one neuron lie upon dendrites or cytons of adjacent neurons (figure), or upon muscle fibres or glands.

Nerve fibres : Although, all parts of a neuron transmit excitations (= impulses), but the transmission is always unidirectional. The dendrites and cytons usually constitute the impulse receiving parts which receive impulses directly from receptors, or from other adjacent neurons. The axons are specialized as fibres conducting impulses away from the receiving parts. Thus, the reaction or response impulses are always carried to the effectors by axons. That is why, the term ‘nerve fibres’ is usually applied to the axons. The latter are 0.1 mm to one or more (upto 10) metres long and about 0.025 m thick on an average.

(1) Excitability : It is the ability of the nerve cells and fibres to enter into an active state called the state of excitation in response to a stimulus. Excitation arises at the receptors on account of various stimuli such as light, temperature, chemical, electrical or pressure which constantly act on the organisms.

(2) Conductivity : The excitation does not remain at the site of its origin. It is transmitted along nerve fibres. The transmission of excitation in a particular direction is called conductivity.

Definition of nerve impulse : A wave of reversed polarity or depolarization (action potential) moving down an axon is called a nerve impulse.

Mechanism of conduction of nerve impulse

Most accepted mechanism of nerve impulse conduction is ionic theory proposed by Hodgkin and Huxley. This theory states that nerve impulse is an electro-chemical even governed by differential permeability of neurilemma to Na+ and \[{{K}^{+}}\]which in turn is regulated by the electric field.

(1) Transmission of nerve impulse along the nerve fibre

(i) Polarization (Resting membrane potential-RMP) : In a resting nerve fibre (a nerve fibre that is not conducting an impulse), sodium ions \[N{{a}^{+}}\] and \[C{{l}^{}}\]predominate in the extracellular fluid, whereas potassium ions \[({{K}^{+}})\] predominate in the intracellular fluid (within the fibre). Intracellular fluid also contains large number of negatively charged (anions) protein molecules. \[N{{a}^{+}}\] are 10 times more outside the neuron and \[{{K}^{+}}\] ions are 25 times more inside the cell. Thus it makes a considerable difference between the ion concentration outside and inside the plasma membrane. It also causes a difference in electrical charges on either side of the membrane. The plasma membrane is electrically positive outside and negative inside. This difference is called potential difference. The potential difference across the plasma membrane is known as resting potential. This potential averages \[-\text{ }70\,\,mv\,\,(-\,40\text{ }to\,\,-90\,\,mv)\] in inner side of membrane in respect to outer side. 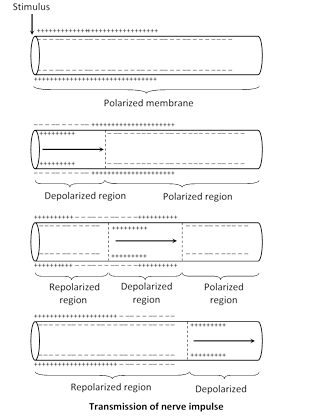 (iii) Repolarization : With the increase of sodium ions inside the nerve cell, the mebrane becomes less permeable to sodium ions whereas the permeability membrane to potassium ions increases. The sodium ions are pumped out of the cell and potassium ions are pumped into the cell until the original resting state of ionic concentration is achieved. Thus this makes the membrane negative on inside and positive on outside. This process is called repolarization. 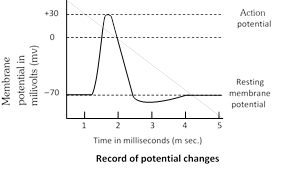 The last movement of ions is thought to take place by an active transport mechanism called sodium potassium pump (also called sodium potassium exchange pump or sodium pump). The sodium-potassium pump is a process of expelling out sodium ions and drawing in potassium ions against concentration and electrochemical gradient. The entire process of repolarization requires some time during which the nerve cannot be stimulated again. This period is called refractory period. During repolarization, as the cell returns to its resting potential, the neuron is ready to receive another stimulus.

The synapse : The synapse is an area of functional contact between one neuron and another for the purpose of transferring information. Synapses are usually found between the fine terminal branches of the axon of one neuron and the dendrites or cell body of another. This type of neuron is called axo-dendrite synapse. Sir Charles Sherrington (1861-1954) was the first person who used the term ‘synapse’ to the junctional points between two neurons. 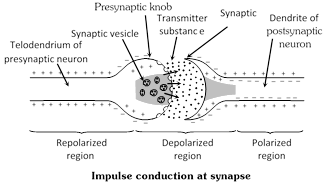 (1) Structure of synapse : A typical (generalized) synapse consists of a bulbous expansion of a nerve terminal called a pre-synaptic knob lying close to the membrane of a dendrite. The cytoplasm of the synaptic knob contains mitochondria, smooth endoplasmic reticulum, microfilaments and numerous synaptic vesciles. Each vescile contains neurotransmitter (chemical substance) responsible for the transmission of the nerve impulse across the synapse. The membrane of the synaptic knob nearest the synapse is thickened and forms the presynaptic membrane. The membrane of the dendrite is also thickened and is called the post synaptic membrane. These membranes are separated by a gap, the synaptic cleft. It is about \[200{AA}\] across. The post synaptic membrane contains large protein molecules which act as receptor sites for neurotransmitter and numerous channels and pores.

(iii) The synaptic vesicles then return to the cytoplasm of the synaptic knob where they are refilled with neurotransmitter.

(v) Having produced a change in the permeability of the postsynaptic membrane the neurotransmitter is immediately lost from the synaptic cleft. In the case of cholinergic synapses, acetylcholine (ACh) is hydrolysed by an enzyme acetylcholinesterase (AChE) which is present in high concentration at the synapse.

(vi) The products of the hydrolysis are acetate and choline which are reabsorbed into the synaptic knob where they are resynthesized into acetylcholine, using energy from ATP.

Types and Nature of Neurotransmitters

Synapse, A one-way valve : The synapse cannot transmit an impulse in the reverse direction as the dendrites cannot secrete a neurotransmitter. Thus, the synapse acts as a one-way valve, allowing the conduct of impulse from axon to dendron only.

Synaptic delay : Transmission of an impulse across a synapse is slower than its conduction along a neuron. This is because of the time needed for the release of a neurotransmitter, its diffusion through the synaptic cleft, and its action on the postsynaptic membrane. The difference in the rate is called synaptic delay. It amounts to about half a millisecond at body temperature \[({{37}^{o}}C).\]

“All or None law” (Keith Lucas, 1905) : When stimulated, the axon membrane (= axolemma) does not respond for a moment due to its resistance or threshold to stimulation. However, when its threshold is broken, the stimulation is conducted through its whole length as a strong impulse. If the stimulation is too weak to break the axon’s threshold, impulse is not established, but if the intensity of stimulation is much more than the threshold value, impulse conduction remains normal. Thus, the action potential obeys “all or none law”. In other words, impulse conduction is such a triggered phenomenon which, though occurs in a twinkling, like an explosion, but only when it reaches “ignition point” or firing level”.