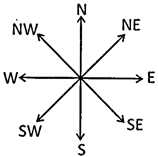 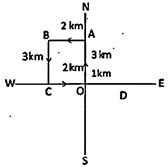 Type - II PASSAGE Each of the following questions is based on the given information:
Catgeory: 8th Class

SCIENTIST is coded in a certain language as ICSTNETSI. AMBULANCE will be coded in the same language as: (a) MBUALNACA           (b) BMAALUECN (c) MAUBALCNE           (d) UBMLAECNA (e) None of these Answer: (b) Explanation: The word is divided into three equal sections, and the letters in each section are moved backward.

Type - II In this type of questions, coding of words is done by writing their letters in reverse order.   If in a certain language KINDLE is coded as more...
Catgeory: 8th Class

Inserting Missing Number   Learning Objectives     Inserting the Missing Numbers   In such type of questions, a figure, a set of figures or a matrix is given, each of which bears certain characters, and be it numbers, letters or a group of letters / numbers following a certain pattern. The candidate is required to decipher this pattern and accordingly find the missing character in the figure.   Example 1

Statement - Conclusion   Learning Objectives     Conclusions Conclusions are inferences that can be drawn on the basis of the information given in the statement. In these type of questions, a candidate is asked to decide whether a given inference follows or not in the light of the given statement or passage. For example, Shravan - Let's go to a restaurant. Prakash - I have only Rs. 100. What is your conclusion? - Shravan and Prakash cannot go to a restaurant. But why? Because nothing comes in Rs. 100 in a restaurant. But how do you know this? You don't. You should keep in mind that never bring outside information into your reading of a decision making problem. Let's understand how should we reach a conclusion. For this, follow the simple rules given below:   Rule 1 Don't assume information, facts unless it is a universal truth.   Statement: People should not give false information to an officer of law. Conclusion: They should be honest. Explanation: The conclusion here is based on universal accepted fact that 'honesty is the best policy'. So, it follows the statement.   Rule 2 A probably true conclusion has no place and you should treat that as 'does not follow'.   Statement: If we bring black money back from abroad, it will lead to country's development. Conclusion: Black money will help in funding our ongoing development projects. Explanation: Here, the conclusion may be true and may not be true. So, it is a case of 'probable true' conclusions. Hence, it does not follow the statement.   Rule 3 Make sure you are not bringing outside information into your questions.   Statement: A player should have the capacity to deal with pressure and control aggression. Conclusion: Mary Kom, who is a great boxer, has all the above qualities. Explanation: In the above conclusion, the author is bringing outside information (about Mary Kom), so it does not follow the statement.   Rule 4 Pay attention to the keywords such as - 'only', 'any' 'if and only if, 'either', 'neither', 'all', 'must', 'never', 'always' etc.   Statement: Parents are ready to pay any price for admission in a good public school for their children. Conclusion: All the parents are well-off these days. Explanation: Since all parents are not very well off, so the conclusion is not true/ use of all makes it invalid. If 'some' would have been used, instead of 'all’ then it might have been true.   Rule 5 For any new scheme, policy, even for an organisation which has been newly introduced, it can be concluded that there is a need for that scheme, or policy or an organisation. It can also be concluded that people will welcome it and there are all the essential more...
Catgeory: 8th Class

Rule Detection   Learning Objectives     Rule Detection   In this type of question, a set of figures is given which follow the same rule. On the basis of this rule, the answer figure is to be selected. There are mainly two types of questions asked on this topic.   Type - I In this kind of questions, a rule has been given in the form of a statement and on the basis of this rule a set of figures is to be detected following the rule.   Example 1 Rule: Closed figure becomes more and more open. (a)

(e) None of these Answer: (a) Explanation: The square which is a closed figure looses one side at each step and the arc which is an open figure gradually becomes a circle.   Commonly Asked Questions   Rule: The number of straight lines forming the geometrical pattern goes on increasing. (a)

(e) None of these Answer: (c) Explanation: The number of straight line forming the geometrical pattern is 3, 4, 5 and 6.   Rule: The series become complex as it proceeds. (a)

(e) None of these Answer: (c) Explanation: The number of lines inside the square is increased at each step making the series complex as it proceeds.   Type - II In this type of questions, a set of figures is given in a matrix. All figures in the matrix follows the same rule. To solve these questions, one should look at the figures in matrix carefully and on the basis of this rule, find the figure that fits in the blank box.   Example 1

Coal and Petroleum   Coal Coal is a combustible sedimentary rock. It is a fossil fuel. It is composed primarily of carbon and hydrogen along with small quantities of other elements, notably sulphur. It is a nonrenewable resource.   Coal Formation 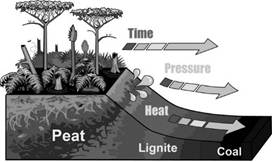 Coal is a sedimentary rock formed from plants that flourished millions of years (about 300 million) ago when tropical swamps covered large areas of the world. Lush vegetation, such as early club mosses, horsetails, and enormous ferns, thrived in these swamps. Generations of this vegetation died and settled to the swamp bottom and over time the organic material lost oxygen and hydrogen, leaving the material with a high percentage of carbon. Layers of mud and sand accumulated over the decomposed plant matter, compressing and hardening the organic material as the sediments deepened. Over millions of years, deepening sediment layers, known as overburden, exerted tremendous heat and pressure on the underlying plant matter, which eventually became coal.   Types of Coal

Peat               Lignite     Bituminous    Anthracite   As geological processes apply pressure to dead biotic matter over time, under suitable conditions it is transformed successively into: Peat: It is considered to be a precursor of coal, has industrial importance as a fuel in some regions, for example, Ireland and Finland. Lignite: It is also referred as brown coal, is the lowest rank of coal and used almost exclusively as fuel for electric power generation. Bituminous: It is dense rock which is usually black but sometimes dark brown, used primarily as fuel in steam-electric power generation, with substantial quantities also used for heat and power applications in manufacturing and to make coke. Anthracite: It is the highest rank of coal; a harder, glossy, black coal used primarily for give some other use.   Petroleum It is naturally occurring liquid. It is, also known as crude oil, a fossil fuel, formed over a period of millions of years, from organisms that lived in the sea at that time. Their dead bodies sank to the bottom of sea and were covered with mud and sand. Due to high pressure, heat, in the absence of air, the dead remains of tiny plants and animals were slowly converted into petroleum. The process of separating crude petroleum oil into more useful fractions is called refining. The various useful fractions obtained by the refining of petroleum are: Petroleum gas. Petrol, Kerosene, Diesel, Lubricating oil. Paraffin wax and bitumen.   Combustion It is a process of rapid oxidation or burning of a substance in the presence of oxygen to produce heat and light. Requirements for the occurrence of combustion are: Fuel Fuel, substance that reacts chemically with another more...
Catgeory: 8th Class

Natural resources are conserved for their biological, economical and recreational values, as well as their natural beauty and importance to the local cultures. For example, tropical rainforests are protected for their important role in both the global ecology and the economic livelihood of the local culture. A coral reef may be protected for its recreational value for scuba divers and a scenic river may be protected for its natural beauty.   Biodiversity A wild range of different types of organisms which grow, multiply and thrive naturally, are found at any given time in a particular habitat. We should conserve forests and wildlife to preserve biodiversity to prevent endangered species from becoming extinct and to maintain ecological balance in nature.   Deforestation

Deforestation means large scale removal of forest prior to its replacement by other land uses Forests are removed for a variety of reasons, including agriculture, timber harvesting, mining and to make way for roads, dams and human settlements.   Protected Areas Protected areas are the areas of land or sea especially dedicated to the protection and maintenance of biodiversity. These are managed through legal means and have been set up within the legal frame work of Indian wildlife (Protection) Act.1972. Examples of protected areas are national parks and wildlife sanctuaries.   National Parks A national park is a large area dedicated to conserve the environment, natural resources and the wildlife therein. In a national park,   Wildlife Sanctuaries   Forest Reserves These more...
Catgeory: 8th Class

Cell Structure and Functions   Cell Structure Cells are of two Types prokaryotic cell and eukaryotic cell, found only in bacteria and archaebacteria, all the components, including the DNA, mingle freely in the cell's interior, a single compartment. Eukaryotic cells, which make up the plants, animals, fungi and all other life forms contain numerous compartments or organelles within each cell. The DNA in eukaryotic cells is enclosed in a special organelle called the nucleus, which serves as the cell's command centre and information library. The term prokaryote comes from Greek word that mean “before nucleus” or “prenucleus,” while eukaryote means "true nucleus."   Prokaryotic Cells Prokaryotic cells are among the thinnest of all cells, ranging in size from 0.0001 to 0.003mm in diameter. These cells, which can be rodlike, spherical or spiral in shape are surrounded by a protective cell wall. 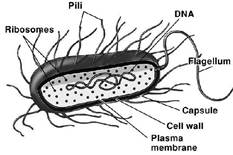 The eukaryotic cell cytoplasm is similar to that of the prokaryotic cell except for one major difference. Eukaryotic cells have a nucleus and numerous other membrane enclosed organelles. Like separate rooms of a house, these organelles enable specialized function to be carried out efficiently. For example, the building of proteins and lipids take place in separate organelles where specialized enzymes geared for each job are located. The nucleus is the largest organelle in an animal cell. It contains numerous strands of DNA the length of each strand being many times the diameter of the cell. Unlike the circular prokaryotic DNA, long sections of eukaryotic DNA pack into the nucleus by wrapping around proteins. As a cell begins to divide, each DNA strand folds over onto itself several times, forming a rod-shaped chromosome.   Cell Functions To stay alive, cells must be able to carry out a variety of functions. Some cells must be able to move and most cells must be able to divide. All cells must maintain the right concentration of chemicals in their cytoplasm, ingest food and use it for energy, recycle molecules, expel wastes and construct proteins. Cells must also be able to respond to ranges in their environment.   Movement Many unicellular organisms swim, glide, thrash or crawl in search for food and escape from enemies. Swimming organisms often move by means of a flagellum, a long tail-like structure made of protein. For example, many bacteria have one, two or many flagella that rotate like propellers to drive the organism along. Some single-celled eukaryotic organisms such as euglena also have a flagellum, but it is longer and thicker than the prokaryotic flagellum. The eukaryotic flagellum works more...
Catgeory: 8th Class