Only a single line passes through two distinct points 'A' and 'B'.

Points that do not lie on the more...
Catgeory: 6th Class

Urban Livelihoods   Summary   1.            With the growth in industries and the shrinking of agricultural income, people are migrating from rural areas to urban areas. 2.            About a quarter of India's population is urban as there are many opportunities for jobs here. 3.            People in towns and cities are involved in manufacturing and in selling and service sectors, i.e. in secondary and tertiary occupations and in primary occupation like farming. 4.            Urban people are either self-employed, fixed monthly salaried or daily wage earners.   Introduction Raman, a student of class VI lives in a multi-storeyed building in New Delhi. Every morning, the milkman visits their house to deliver milk and a vendor drops newspaper at their door step. Soon after, Bitti bai arrives. Bitti bai is a domestic help. Both his parents are doctors. Raman gets ready for school and his driver Ramesh drops him by car. Sometimes Raman walks to school. On the way he crosses a market. There are many shops with shopkeepers selling all kinds of wares and services. Often a rickshaw puller approaches Raman to offer him his services. Raman crosses the market road carefully. It is a busy road. Life in a city is busy and fast and everyone is in a hurry?the office-goers, school children, vendors.   MIGRATION-MOVEMENT FOR LIVELIHOOD Many towns and cities grow with time. With the growth of industries and shrinking of agricultural land, millions of people move to cities and towns to seek employment every year. The movement of people from rural areas to urban areas is called migration. Often people are lured to migrate to urban areas as unskilled daily wage earners by the development projects in urban areas. Having moved to the cities, the migrants generally settle in the poor areas of the city streets. These areas?usually lack basic infrastructure facilities?electricity, water and drainage. In course of time these areas develop into slums. Thus, slum dwellers are the urban poor?the daily wage workers, casual labourers, domestic servants, rickshaw pullers, hotel boys, etc. At the same time, highly skilled and educated people also move from one city to another in order to get better opportunities. They are mostly well paid too. Thus, movement is there in skilled and unskilled segment. Sometime high officials are placed in rural areas for looking after their projects or industries there. But mostly people tend to move from rural area to urban area in search of a better life and livelihoods.   Migration of more...
Catgeory: 6th Class

Rural Livelihoods   Summary   1.            Occupation is of three types: primary occupation, secondary occupation and tertiary occupation. 2.            Farming, animal husbandry and fishing are primary rural occupations. 3.            A farmer grows crops in the fields, manages orchards or vineyards, and is of four types: large farmers, medium farmers, marginal farmers and landless farmers. 4.            Poultry and dairy farmers breed and raise livestock for eggs, meat and milk. 5.            Secondary rural occupations include brick making, masonry, carpentry, and handicraft like pottery, basket making and weaving. 6.            People in tertiary rural occupations include teachers, doctors, rickshaw pullers, drivers, shopkeepers, sweepers, water bearers, toddy tappers, washermen, hair dressers, etc.   Introduction Some people work in offices, some in hospitals or courts, and yet others run businesses of their own. Your parents go to work every day They do this to earn money so that they can feed you well, educate you, and give you all the necessities of life. Means of livelihood are different in rural areas. People do different kinds of jobs to earn money and lead their life.   The means by which you earn money is called livelihood. The method you adopt to earn a living is your occupation. Thus, occupation is the means to earn a livelihood. There are various types of occupations.   Q. What is the occupation of your parent(s)?   TYPES OF OCCUPATIONS The various occupations may be classified into three sectors. These are?Primary Sector, Secondary Sector and Tertiary Sector.   PRIMARY SECTOR The primary sector consists of those activities concerned with the direct extraction of materials from nature. In this sector, people are engaged in agriculture, fishing, dairy farming and poultry farming, mining, forestry, etc. All these occupations are related to obtaining raw materials from the earth directly and hence are primary occupations.   SECONDARY SECTOR The secondary sector includes industries that process, transform and assemble raw materials into products. For example, the cotton textile industry makes cloth from the cotton plant; a bakery makes bread, cakes, pizzas and biscuits from wheat; the steel industry converts iron ore into steel. All manufacturing industries also come in this sector. The secondary sector is dependent on the more...
Catgeory: 6th Class

Urban Administration   Summary   1.            Urban local administrative units provide basic infrastructure and services in cities. 2.            They are classified into three major categories: Nagar Nigam governing large cities, Nagar Palika governing smaller cities and Nagar Panchayat governing small towns. 3.            The area under a Nagar Nigam which is also called Municipal Corporation and is further divided into Wards, which may be grouped together into Ward Councils. 4.            Each ward elects its representative for the Municipal Corporation. This representative is called Ward Councillor. He looks after the problems related to the ward he represents. 5.            Municipal elections are held every five years. 6.            The Mayor, Deputy Mayor and Municipal Commissioner have the authority to take decisions. 7.            The functions of the municipal bodies relate to public health, welfare, public safety, public infrastructure works and development activities. 8.            The municipal bodies levy different taxes such as property tax, water tax and entertainment tax to collect funds for carrying out their functions.   Introduction 'Urban' means pertaining to city or town. The urban scenario is quite different from the rural one. Unlike villages, cities are large and densely populated. Cities have modern civic amenities like well-developed communication and transport system, water supply, electricity, etc. However, cities are constantly grappling with problems today. Concentration of population in urban areas has resulted in chaos like mushrooming of slums with inhuman surroundings, degradation of the environment leading to air, water and noise pollution, traffic jams, power cuts, crowded markets and spread of diseases like dengue and swine flu etc. Who takes care of such problems and ensures that the city runs smoothly? Whom do we approach when we need help to get rid of the mosquito menace or the overflowing garbage? Here, in this chapter, we will look at the working of the local government in urban areas.   COMPOSITION OF URBAN ADMINISTRATION Cities of India have a local government that provides necessary community services and civic amenities for its people. The urban local governments are of three kinds and organized according to the size of the city: Municipal Corporation or Nagar Nigam, Municipal Council or simply Municipality or Nagar Palika and Town Committee or Nagar Panchayat. A Municipal Corporation or Nagar Nigam administers a city that more...
Catgeory: 6th Class

Rural Administrations   Summary   1.            Two rural government officials administer a village - the patwari and the police. 2.            The in-charge of the police station of an area is the Station House Officer (SHO). He solves cases of burglary, quarrels, etc., in that area. 3.            The patwari is the village accountant who maintains land records by visiting agricultural lands, preparing land maps, writing records of land ownership and crop grown in every harvest, etc. 4.            The patwari reports to the tehsildar who is the revenue officer at the tehsil level. 5.            The District Collector is the head of the revenue department in a district. 6.            The Hindu Succession Amendment Act (HSAA) which came into force in September 2005 gave the Hindu sons and daughters equal right to ancestral property. Introduction Villages in India are mainly clusters of small huts and most of the people residing here are farmers. Around three-fourth of Indians population live in villages. This is why Gandhi at the beginning of 20th century said, ?The soul of India lives in its villages?. Villagers own pieces of land and grow crops in them. The local government maintains proper records of the size of the lands and their produce. It maintains peace and settles disputes over their land. This is how rural administration works. 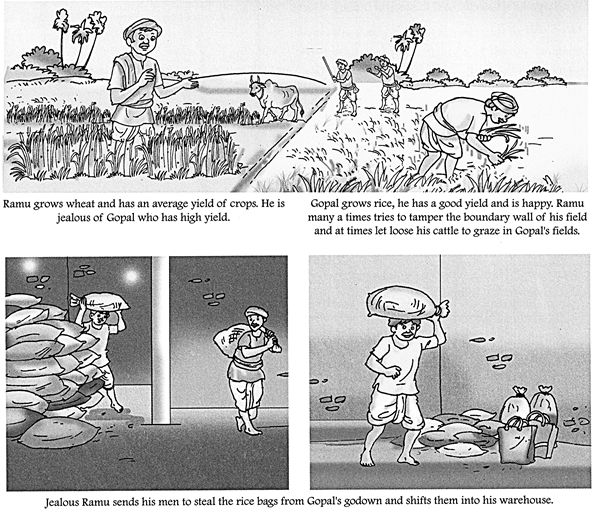 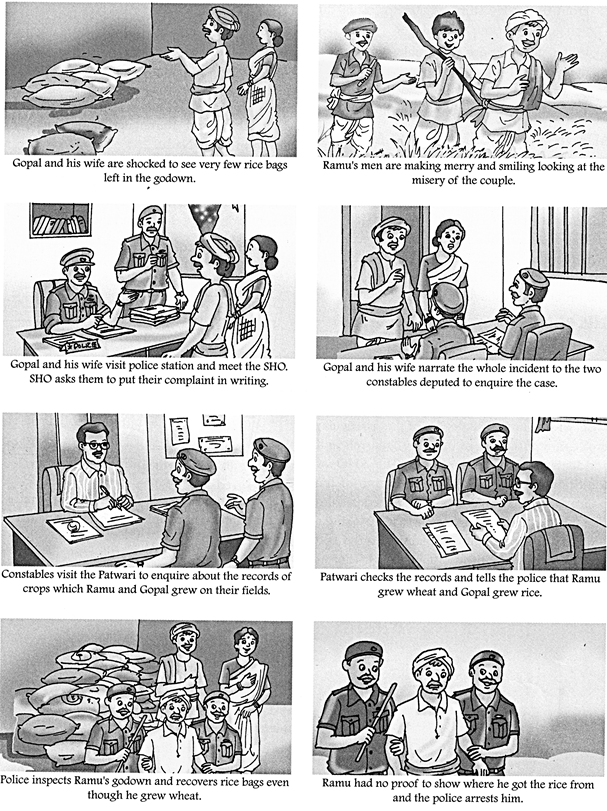 1. From the above story what impression do you get of a patwari in a village? 2. When villagers are in trouble, who helps them to resolve their problems? Let us understand the Police and Patwari and their roles to answer the above questions.   ADMINISTRATION IN A VILLAGE Two rural government officials play an important role in administering the villagers during conflicts: the patwari and the police. The patwari is the land record officer, whose job is to visit agricultural lands and maintain record of ownership and yield. The local police solve the quarrels and are in-charge of maintaining law and order in the village.   THE POLICE You have seen how the police helped Ramu, a villager. Villages are divided into areas and put under different police stations. Each police station is responsible for maintenance of law and order of more...
Catgeory: 6th Class 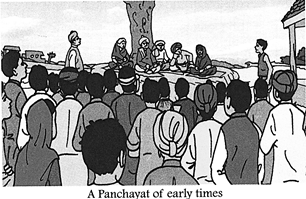 In 1947, India became free and chose the democratic way of governance. Mahatma Gandhi believed that India's independence must begin from the bottom or at the grass root level. Every village ought to be responsible for its own affairs and governance. He advocated Panchayati Raj as the foundation of India's political system.   He called this political more...
Catgeory: 6th Class